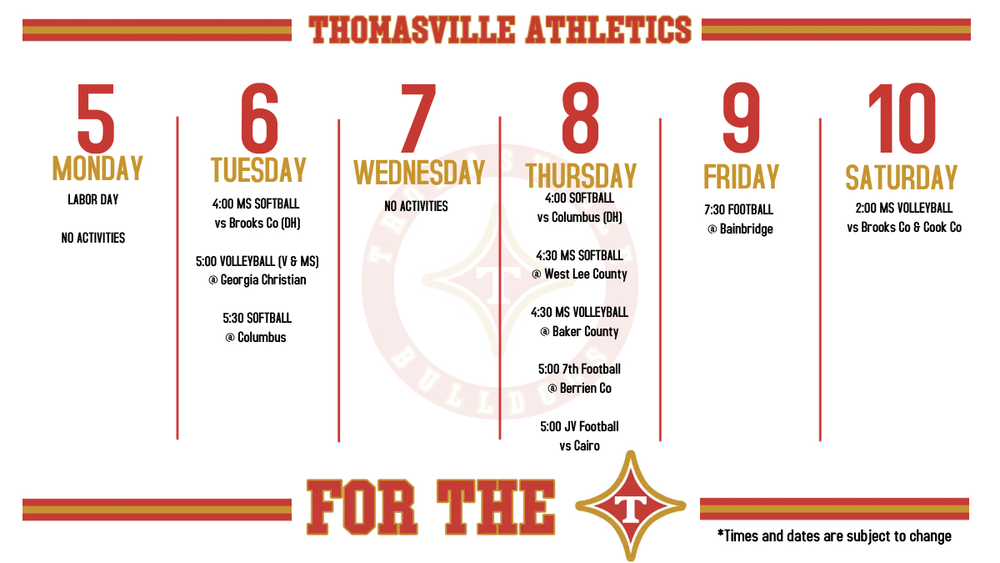 I hope everyone had a great Labor Day weekend. Last week was a great week in the world of athletics for the Thomasville City Schools.

The THS Lady Bulldog Softball team got us off to a great start with a non-region victory over Pelham on Monday, then followed that up with a 3 game sweep of region foe, Carver-Columbus. The Lady Dogs improved to 5-0 in Region 1-AAA play. This week they take on Columbus in a 3 game set. Playing one game at Columbus today, and a DH at home on Thursday. For the Thursday DH, all THS 9-12 grade students can purchase a ticket for $1 during lunch on Thursday. We need a great crowd to show up and support these girls in this big region series. Tickets will be on sale in the office of the Scholars Academy and the Cafeteria at THS.

The Lady Bulldogs Volleyball team also had a perfect week. On Tuesday night at TCC, the JV squad and Varsity team came away with big victories over the Yellow Jackets. On Thursday, the Lady Dogs swept both Colquitt County and Community Christian.

The week was capped on Friday night in Cairo as our Varsity Bulldogs battled from behind twice to come away with a sweet victory over the rival Syrupmakers. On the "Night the lights went out in Cairo", the Dogs scored with 17 seconds to go to take the lead before a Pick Six sealed the deal. The Dogs keep the Syrup Pitcher where it belongs with a 36-27 victory. I would also like to congratulate Coach DeLay and his staff on his first victory as the head coach of the Bulldogs!

We will travel a little farther on Highway 84 this week to take on the Bainbridge Bearcats. Kickoff is set for 7:30. Ticket information will be released later this week.

I hope everyone has a great week and gets out to support our student-athletes when you are able!