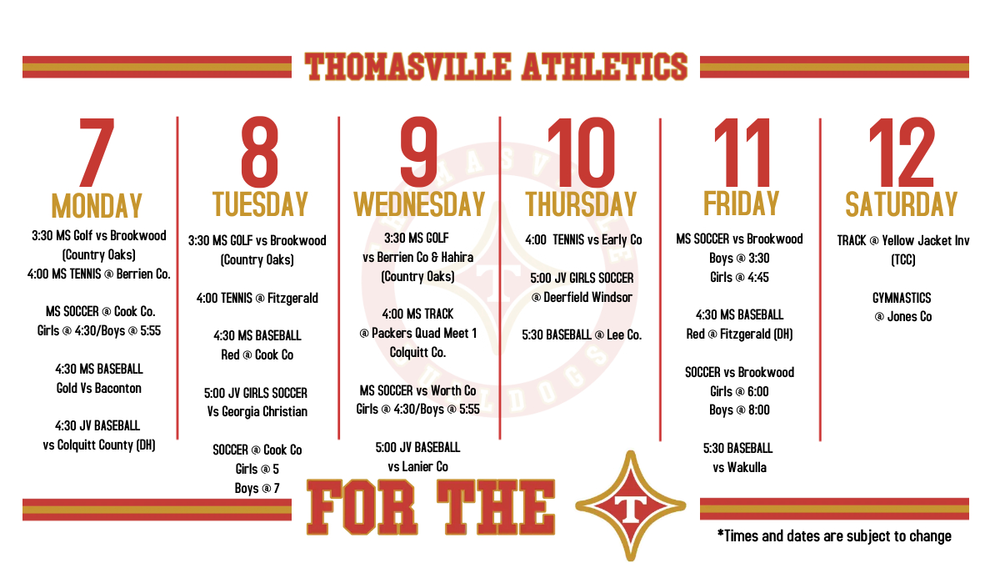 This past week was super busy in the athletics world, as spring sports are in full swing.

The THS Gym Dogs competed in the first ever gymnastics meet for the new team. While no one placed or had a qualifying score, it was a great day for the Bulldogs!

The THS Golf team defeated Cairo on Thursday at Tired Creek Golf Course shooting a team score of 167 to Cairo's 192. Junior Brycen Jones shot a 2 under par 34, while sophomore Brandt Herndon contributed a 3 over 39. On Saturday the Dogs travelled to the Bainbridge Country Club to participate in the 22nd Annual Bearcat Invitational. Shooting a 341, the Dogs finished 4th in the 11 team tournament. Jones shot even par to take home the Individual Medalist honors.

The boys tennis team picked up their first region win of the year on Tuesday with a win over Worth County.

On the soccer field the boys remained on a recent hot streak, defeating Tift County 4-3 on Tuesday and routing Worth County 10-0 on Friday night. On Friday the Dogs goals were scored by Andrew Geyer (4), Matthew Lewis (2), Jake Von Hellens, Callaway Conklin, Josh May, and Cole Sullivan. The Bulldogs are undefeated in region 1-AA play halfway through the region schedule.

The girls soccer team lost a tough one to Tift on Tuesday, 2-1, but rebounded on Friday to defeat Worth 1-0 in Overtime, with SR Bre Diggs scoring the winning goal.

Middle School soccer also had a successful week with both the boys and girls picking up wins over Fitzgerald and Berrien County. On Saturday at the 6th Annual Bullpup Invitational at Veterans Memorial Stadium, the girls team came away with the championship! Way to go girls!

On the diamond, the Bulldogs secured an 8-0 victory over Bainbridge on Tuesday. Junior Jacob Jordan picked up the win for the Dogs. The JV Dogs picked up a win at Cairo, 10-7 and tied Cook 4-4, while the Gold middle school team defeated Whigham 6-0 on Wednesday.

Congratulations to all of our student-athletes that continue to represent our schools in a great manner! Be sure to get out and support them when able!

Be sure to check out the freshly updated THS Athletics web page. More updates to come in the new future!