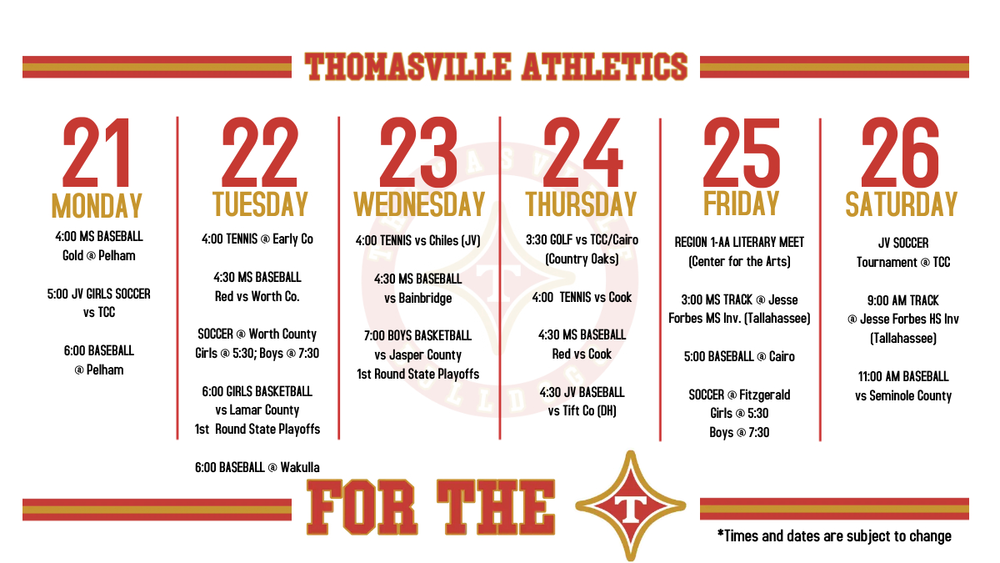 It was a busy and successful week for our athletics department last week.

First off, I would like to congratulate both our Girls and Boys Basketball teams for claiming the Region 1-AA Championship on Friday night. In front of a large crowd at the THS Gym, the Lady Dogs defeated Berrien on Thursday night 49-36 and took down Early County 42-21 to claim their first region title since 2012-2013.

The boys finished the Region sweep by whipping Cook 62-39 on Thursday and also defeating Early County 61-49 to 3-peat as region champions. These victories set both teams up to host the first round of the GHSA State Playoffs. The girls will host Lamar County on Tuesday at 6:00 PM. On Wednesday the boys will host Jasper County at 7:00 PM.

Baseball season is off to a fast start with our Bulldogs going 3-1 over the first week of the season. The Diamond Dogs defeated Bainbridge 20-6, Seminole Co 8-1, and Brooks Co 15-4 on the road, while falling to Cairo at home on Friday, 0-2.

Middle School soccer had a great week with the boys defeating both Worth County and Berrien, while the girls were able to come away with a win over Berrien on Wednesday.

The varsity boys team began region play on Friday with a 9-1 victory on the road over Berrien County.

On Friday of this week our Literary Team will be in action on Friday at the Region 1-AA Literary Meet being held at the Thomasville Center for the Arts.

Golf season begins this week with the Dogs hosting TCC and Cairo at Country Oaks on Thursday and the High School track team will see its first action of the year at Godby in Tallahassee on Saturday.

Good Luck to all of our teams!

Stay tuned to our social media for schedule updates throughout the week!