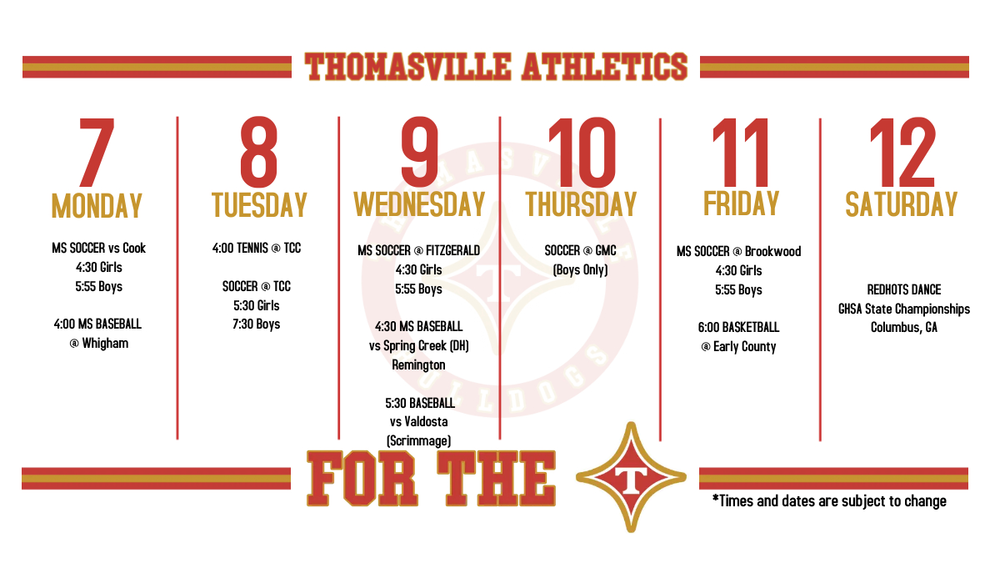 Congratulations to the THS Swim and Dive Team members that competed in the GHSA swimming and diving championships last week. SR Lewis Stringfellow qualified for the Finals in both the 100 Freestyle and 100 Backstroke. Sophomore Makenna Ponder finished 34th out of 68 swimmers in the 50 Free. The girls 200 yd Relay team made up of Ponder, SR Natalie Herrin, JR Olivia Suite, and JR Katherine Jones recorded their best time of the season. JR diver AC Taylor competed on Thursday morning and finished 7th in the 1A-3A division of the Diving Championships.

The Bulldogs Boys Basketball team locked up the top seed in the upcoming Region 1-AA Tournament with their victory over Berrien on Friday Night. The Dogs completed another weekend sweep by defeating Cairo on the road Saturday night.

The girls lost a close one on the road at Berrien on Friday, but rebounded with a victory over Cairo on Saturday night. The girls have also secured the top seed in the Region tournament!

Both teams finish the 2021-2022 regular season on the road at Early County this Friday.

The Region 1-AA Basketball Semifinals and Finals will be played at the THS Gymnasium on Thursday and Friday, February 17th and 18th.

The THS Red Hots Dance Line competed Saturday at McIntosh High School in Peachtree City and once again brought home some hardware. The girls finished 1st in the High Kick division and placed 2nd in the Jazz portion of the competition. These young ladies will be defending their State Championship from last season next weekend (Feb. 12) in Columbus!

Congratulations to the 7 Bulldog Football players that signed Letters of Intent on Wednesday to further their academic and athletic careers at the next level.

We have a busy week ahead in the athletic department as both the tennis and baseball teams see their first action of the year. Tuesday night at TCC the boys and girls soccer teams will be in action, be sure to come and support these young men and women against their cross-town rivals!

I hope everyone has a great week!
Go Dogs
#fortheT