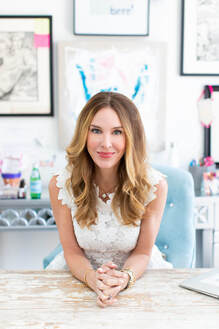 Thomasville High School will honor its graduating Class of 2019 at a Baccalaureate Service of interfaith prayer, music from the Scholars Academy String Quartet, and inspirational words from THS Class of 1998 alumna Mary-Cathryn Mooney Kolb.
Kolb is a native of Thomasville and has had the entrepreneurial bug ever since she was a kid. After graduating from THS and studying communications at Southern Methodist University, Kolb was a first hire at TOMS Shoes and later Director of Sales at SPANX. Kolb, intrigued by the idea that thin little yarns that support and shape bodies could also be turned into high-tech performance fabrics, formed the kernel of the idea to revolutionize the cooling fabric industry with brrr°.  Last year, Kolb was named Business Person of the Year by the Atlanta Business Chronicle in recognition of brrr° and its sales records with retailers using the brrr° cooling technology including NIKE, Southern Tide, Joseph A. Bank, Bed Bath & Beyond and Gilliz Fishing Apparel.
Kolb attributes her success to Thomasville’s tight-knit community where people help each other and truly want others to succeed.
“It’s where I learned fundamental values like kindness, respect, hard work, and how to dream big,” said Kolb.
Kolb contends that the kind of accountability and sense of duty in the Thomasville community is something that children raised in the anonymity large cities don’t have the pleasure of experiencing.
As a successful entrepreneur, Kolb wants to impress upon the Class of 2019 her advice which is to think carefully about the sacrifices and the grit that one needs to turn an idea into an actual company with expenses and budgets and employees.
“Then take a deep breath and jump in with both feet and own it and do it,” said Kolb.
With an appreciation that there are various pathways to success, Kolb hopes every student makes the mark on the world that is right for them.
“For some people, that means going to college and starting a professional career. For others, that might mean taking over a family farm or business. Others might want to work for a non-profit, or enter law enforcement or the armed services. Others might have no idea what they want to do, and that’s okay too,” said Kolb.
She hopes to instill the idea that students need to find their ‘thing’ that is inspiring, rewarding and fulfilling.
“You will know it when it happens, and it feels amazing,” said Kolb.
Kolb has stayed connected with Thomasville as her education and career has taken her all over the world.
“Keeping in close touch with my hometown is what led to this invitation to speak at the THS Baccalaureate, which made me incredibly proud,” said Kolb.
Senior Class President Taylor House will give the presiding introduction, followed by the invocation by Valedictorian Claudia White. A scripture reading will be given by Salutatorian Mason Wilson and the responsive reading will be led by National Honor Society Secretary Morgan Savatgy. Special thanks will be offered by Senior Class Vice President LaTatyana Hadley and closing remarks will be given by Scholars Academy Director Jeanene Wallace and Thomasville High School Principal Dr. Shannon Norfleet. House will conclude the ceremony with a benediction.
Baccalaureate will be Sunday, May 19 at 5:00 p.m. at the MacIntyre Park Auditorium.